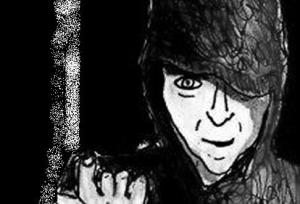 How long did “Acolyte!” take to write? About five days or so. Luckily, I came up with an idea that inspired me so much that I just had to write it – hence why it was finished so quickly.

What were your main inspirations for “Acolyte”? A lot of stuff. My initial inspiration was seeing Youtube footage of a modern videogame called “Until Dawn” and realising that the structure of the game wasn’t too different to the secondhand “Fighting Fantasy”, “Give Yourself Goosebumps” and “Choose Your Own Adventure” books that I used to read when I was a kid.

I should probably point out right now that “Acolyte!” probably isn’t a story for kids though (to use an American term, it’s probably slightly “PG-13”).

As for the concept behind the story, it was initially inspired by both an old FPS game from the 1990s called “Blood” and a Fighting Fantasy novel called “House Of Hell” by Steve Jackson.

Originally, I was going to write a “House Of Hell”-style horror gamebook about someone discovering an evil cult in an old mansion, but then I thought “Wait a minute, this would be hilarious if the player was actually trying to join the evil cult.” So, it kind of ended up turning into a parody of “House Of Hell”

The Hammer adaptation of Dennis Wheatley’s “The Devil Rides Out” was also an inspiration. Even though it’s been a while since I’ve read the book and seen the movie, the trailer is one of the most hilariously memorable movie trailers ever.

How many illustrations are there?: At the moment, there are about ninteen different illustrations, although some of them are repeated throughout the story.

Do you have a blog?: Yes, yes I do and it can be found here. It has daily articles about art/writing/comics (and sometimes reviews for “Doom II” WADs and miscellaneous computer games instead) and daily art posts – which are a few weeks behind the art I post on DeviantART (don’t ask).

This story is fairly … strange.. are you British? Wow, what gave it away?

Is the narrator a reliable narrator? Nope, no way. Not a chance.

How many death/failure scenes are there in “Acolyte!”? If I remember correctly, there are 13. It’s a lucky number. However, this means that just over 20% of the pages are death scenes.

What are they? Ok, here’s the complete list, I hope that you paid attention to the spoiler warning in this page’s title. Because some of these contain GAMEPLAY SPOILERS:

– Being shot by a tommygun
– Meeting some skeletons
– Faking your own death
– Falling into a bottomless pit
– Setting your robes on fire
– Dying of boredom
– Being tortured on the rack
– Not liking the right heavy metal band
– Angering The Elder Goddess Zuccax
– Accidentally consuming a slow-acting poison
– Delivering a stern moral lecture
– Reading from the Necronomicon
– … The last one is a secret one… Try to find it.

Hmmm… Do you like heavy metal music? Do you even need to ask?